Hibs fell to a 9-0 defeat to Celtic in the 2022/23 season opener at the Excelsior Stadium in Airdrie.

Hibs got off to the worst possible start as Celtic took the lead inside the first minute. The home side burst up the right flank and Jacynta was there to collect a low cross, taking a touch before finishing past Benedicte Haaland.

Haaland was called into action again just three minutes later and produced an excellent save. Clarissa Larisey was played through one-on-one against our debutant, who made herself big to deny Celtic’s number 10.

Keen to find an equaliser, Hibs began to take the game to their opponents, testing Rachael Johnstone twice in quick succession. A quick counterattack saw Michaela McAlonie release Krystyna Freda down the left, and the Cypriot’s effort on goal drew a corner for Hibs. Eilidh Adams managed to turn a header goalward from the set piece, but Johnstone made herself equal to it.

Despite Hibs’ chances, we would concede again after 14 minutes. Lucy Ashworth-Clifford’s cross from the right was met in the box by Ellis Notley, but the defender’s deflection looped up over Haaland and into the back of the net.

Celtic would make it 3-0 in the 26th minute. Amy Gallacher played a through ball into the path of Larisey, and the forward slotted the ball past Haaland to add Celtic’s third.

Larisey scored her second of the afternoon in the 37th minute. A ball over the top of the defence found the Celtic forward, who finished into the top left corner.

Crystal Thomas had a chance to open her Hibs account in the 40th minute, after a ball through from Adams found the American bearing down on goal, and she was unfortunate to see her effort go just wide of the bottom right corner.

Celtic added a fifth goal in the 42nd minute, as Jacynta scored her second of the afternoon, volleying home an Ashworth-Clifford cross from the left.

Half-time substitute Siobhan Hunter was on hand to prevent a seventh goal on the hour mark. After Shen Menglu poked an effort past Haaland, Hunter arrived to blast the ball away from the goal in the nick of time.

Larisey completed her hat-trick in the 73rd minute, after dispossessing Haaland in the box and tucking the ball home.

Celtic would score their eighth in the 86th minute from the penalty spot. After winning the penalty in the first place, Gallacher slotted the ball in off the base of the right-hand post.

Hibs would also see out the game with 10 players on the pitch, as the referee deemed Hunter’s challenge on Gallacher worthy of a red card.

The full-time whistle would follow shortly afterwards, bringing a disappointing opening afternoon to an end.

Hibs are back in action next weekend, as we face Hamilton in our first game at Meadowbank. 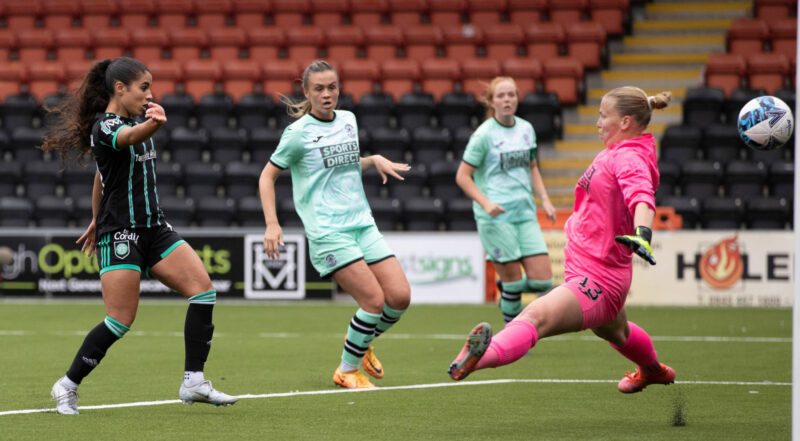